Skip the cheesy presents and go straight for this cheesy quiche this Mother’s Day.

We took our Cheesy Hashbrowns and rearranged the ingredients to create this recipe that is sure to impress mom. We’ll just keep it our little secret that this dish only seems like it took a lot of time and effort.

Tip: You can prepare all ingredients in advance so assembly is easy the next day for a Mother’s Day brunch. 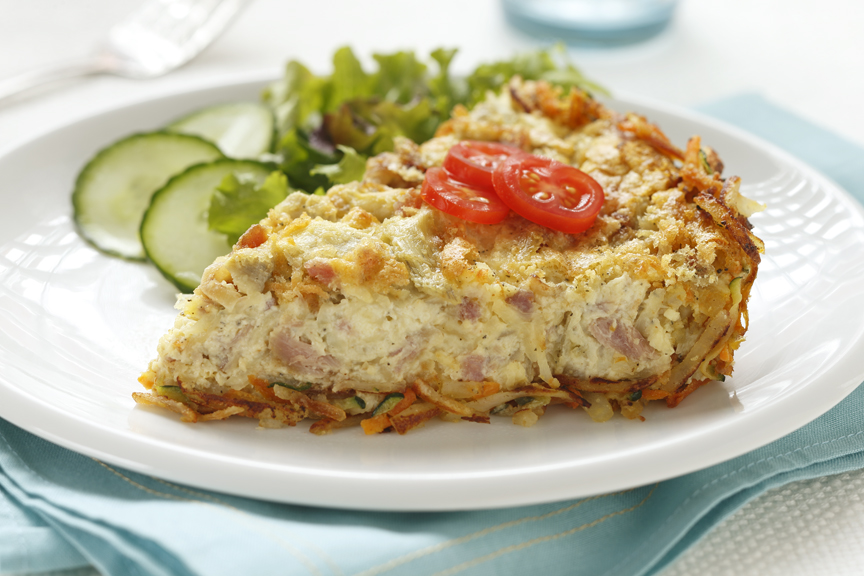 Start with Idahoan Cheesy Hashbrowns and add extra layers of flavor in the crust with the addition of shredded veggies.

Mix veggies and hash browns together. Gently press between paper towels to remove as much moisture as possible. In a large nine inch pie plate, toss the veggie mixture with the melted butter. Sprinkle 4 tablespoons of the cheese packet from the box of Hash Browns over hash brown mixture and blend. Using the bottom of a measuring cup, press mixture into the bottom and up the sides to firmly form a crust. Place rack on the lower third of the oven. Bake for 20-25 minutes until golden brown and the edges begin to crisp. While crust bakes, make the filling.

Blend the eggs and cream until smooth. Stir in the artichokes, leeks, ham, cheese and seasonings.

When the hash brown crust is ready, lower the oven temperature to 350°F and pour the filling into the crust. Bake for 30 minutes then sprinkle the crunchy onion topping on the quiche. Continue to bake for another 15 minutes or until the quiche is light golden brown and firm in the middle. Quiche will settle as it cools.

Wishing all the mothers out there a spectacular day!